The synergy found in HRSA's HIV work across domestic and global programming was just one of the topics covered in HIV.gov's Facebook Live interview with Harold Phillips, Director of the HRSA HIV/AIDS Bureau's Office of HIV/AIDS Training and Capacity Development.

In the 30-minute interview, Phillips highlighted HRSA's Global HIV/AIDS Program work on, for example, training health care workers in techniques to help patients achieve viral suppression, models of care delivery, HIV interventions targeting hard-hit populations, and ensuring the quality of HIV care that is delivered. HRSA has supported the work of the United States President's Emergency Plan for AIDS Relief (PEPFAR) since its inception in 2003.

As for what's going on at the 2018 International AIDS Conference, Phillips found encouragement from the insights being shared across U.S. and international programs through PEPFAR, the continued uptake of PrEP, and getting youth on PrEP and in care if they are HIV infected. Phillips said there was a visible sign of progress in the form of the large contingent of youth attending the meeting, reportedly the largest such event to date.

Phillips explained that HRSA's domestic and global HIV programs inform each other, by design, as HRSA was brought to work on PEPFAR given its well-established efforts in HIV/AIDS care and treatment domestically under the Ryan White HIV/AIDS Program (RWHAP), which was established in 1990. Phillips said HRSA's Global HIV/AIDS Program seeks to “take some of those lessons learned in the domestic sphere and apply them globally.” Perhaps most notably among those experiences were the significant improvements in viral suppression seen among RWHAP clients--from 69.5% in 2010 to 84.9% in 2016 (RWHAP Annual Client-Level Data Report, 2016).

Below are some of Phillips' comments on select HRSA/HAB technical assistance and training projects: 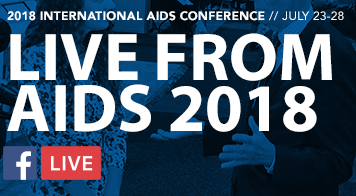 This Facebook Live interview is just one of the events being covered by HIV.gov's Live from AIDS 2018. See their daily updates via Facebook, blogs, messages, and more.

See AIDS 2018 Live for coverage by the conference organizers.

A Day at the Conference

See HIV.gov's Instagram featuring A Day in the Life of the Conference with
HRSA's Harold Phillips.