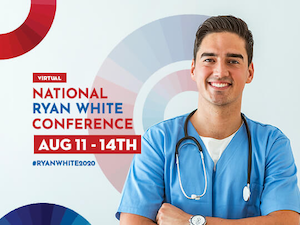 Thank you to the nearly 7,500 HIV care and treatment leaders, Health Resources and Services Administration’s (HRSA) Ryan White HIV/AIDS Program recipients and providers, stakeholders, and people with HIV from across the country who virtually participated in the 2020 National Ryan White Conference on HIV Care & Treatment last week. Throughout the four-day National Conference, more than 1,000 presenters convened 290 sessions, 162 poster sessions, and four plenary sessions. This offered an incredible number of opportunities to deliver program and policy updates, share innovative models of care and best practices, provide training and technical assistance, and disseminate evidence-informed interventions to improve HIV care and treatment services.

The theme of last Friday’s closing plenary was “30 Years of HIV Care and Treatment,” which kicked off the 30th anniversary celebration of the Ryan White Comprehensive AIDS Resources Emergency (CARE) Act, the legislation signed into law on August 18, 1990, creating the Ryan White HIV/AIDS Program. Starting out as an emergency response to help people die with dignity, the program is now a model of HIV care and treatment, a critical component of the Ending the HIV Epidemic: A Plan for America (EHE) initiative, and serves more than half a million people with diagnosed HIV in the United States each year.

U.S. Department of Health and Human Services Assistant Secretary for Health ADM Brett Giroir, who leads over 6,000 public health officers in the U.S. Public Health Service, observed that RWHAP recipients obviously did not have COVID-19 on their “To Do” lists but pivoted to meet the challenge with CARES Act funding. In so doing, he noted that programs at the state, city, and local levels have embraced new tools, including telehealth and HIV self-test kits, to support continuation of service delivery. Simultaneously, federal efforts have made adjustments, such as the change in EHE’s Ready, Set, PrEP program to allow for 90-day prescription fills. ADM Giroir also highlighted national efforts to address the HIV epidemic. In support of the Ending the HIV Epidemic initiative, ADM Giroir discussed the new America’s HIV Epidemic Analysis Dashboard (AHEAD) as a critical way to track efforts to end the epidemic and to hold everyone accountable.

ADM Giroir concluded his remarks with an acknowledgement of RADM Sylvia Trent-Adams and her nearly 30 years working on HIV/AIDS and public health. RADM Trent-Adams, who will soon retire from federal service, started at HRSA in 1992 as a Project Officer, moved on to join HHS headquarters with the Office of the Surgeon General and then with the Office of the Assistant Secretary for Health.

Ryan White’s mother, Jeanne White Ginder, addressed National Conference virtual attendees from her kitchen and shared the challenges her family faced over 30 years ago and how they were responded to by Ryan, her daughter Andrea, and by herself. Ms. White-Ginder recounted the phone call she took at Ryan’s hospital beside 30 years ago from Senator Edward Kennedy, asking her if legislation to be introduced to provide HIV/AIDS care could be named in honor of her son. After Ryan White died, Senator Kennedy again called upon her to come to Washington, DC, to help support passage of the bill. She demurred. Senator Orrin Hatch followed up and asked as well. Again, she declined. But she eventually relented when her colleagues at amfAR and her gay friends made the same request. “It was so ugly back then,” so “horrific,” said Jeanne. As for Ryan’s legacy in terms of what has been accomplished, “Ryan would be so proud,” said Ms. White-Ginder.

AIDS United President and CEO Jesse Milan, Jr., gave the final plenary presentation. Milan, who has lived with HIV for over 30 years, highlighted the beginning of the RWHAP, its evolution, and the ongoing impact of the RWHAP on people with HIV and in the Ending the HIV Epidemic initiative. He asked attendees to think about how they were impacted by Ryan White and how they apply his lessons to their own lives: What did you hope to achieve in your life, what has made it possible to live and work for change, and what work must be done for justice, resilience, and hope?

In the weeks ahead, all National Conference breakout session resources will be made available on TargetHIV.org. HRSA appreciates your patience as videos, slides, and descriptive information is prepared for hand-over from the online platform