Integration of HCV Treatment within an HIV Clinic

The University of California San Francisco, San Francisco General Hospital HIV Clinic developed a care model to enhance access to hepatitis C virus (HCV) treatment among people with HIV by co-locating care and creating a multidisciplinary team. Developed as part of the Ryan White HIV/AIDS Program (RWHAP) Part F Special Projects of National Significance (SPNS) Hepatitis C Treatment Expansion Initiative, this model of care led to a considerable decrease in the number of people with HIV who were coinfected with HCV among the patients served by San Francisco General Hospital during the 2010 and 2011 demonstration years.

HCV is a common co-morbidity among people with HIV. HCV can cause liver damage and a coinfection of HIV can accelerate HCV progression. Medications for HCV change frequently and HCV treatment can be complicated by individuals having more than one health condition. Establishing co-located, coordinated services and a multidisciplinary approach for treating HIV and HCV can lessen many of these challenges and support better care and outcomes for individuals with both HIV and HCV.

This intervention model shifted HCV care from primary care providers to a dedicated multi-disciplinary team co-located within the San Francisco General Hospital HIV Clinic. This co-location of services enhanced treatment initiation of individuals with HCV identified through screening at the HIV clinic. It also allowed the team to be nimble in response to the changing landscape of HCV treatment and to enhance the coordination and efficiency of care.

The multidisciplinary team included an infectious disease specialist, two medical fellows, a dedicated hepatitis nurse, a pharmacist, a pharmacy intern, and a social worker. The multidisciplinary approach allowed each member of the team to focus on their unique expertise, from treatment plans developed based on a patient’s co-morbidities, to medication adherence, and to the linkage to essential social supports to facilitate overall well-being and ability to engage in treatment.

Taking prescribed medication on schedule and as directed (adherence) is essential for the success of HCV treatment. The hepatitis nurse and/or pharmacist supported medication adherence with counseling and check-ins with patients. Due to the high cost of HCV treatment, San Francisco General Hospital also counseled patients on safe storage of HCV medication.

The clinical care model implemented by San Francisco General Hospital resulted in increased capacity of the clinic to treat individuals with HCV, and improved treatment outcomes and HCV cure rates among individuals coinfected with HIV and HCV.

“With only 300 HCV-infected clients left to treat, San Francisco General Hospital could eradicate HCV in its clinic altogether.” 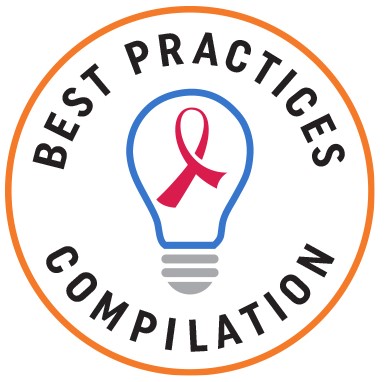