AIDS at 40: Envisioning a Future We Never Imagined 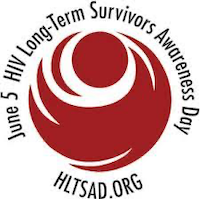 June 5, 1981. Many people who work in the HIV field know its significance: the day when the first AIDS cases were officially reported. Some among us know the date with the immediacy of living with HIV. (Read I Am a Long-term Survivor of HIV, by HRSA's Antigone Dempsey.)

We commemorate those who are living with HIV, and the many who did not survive, on HIV Long-Term Survivors Awareness Day. Looking back on the decades, with so much grief and loss and progress over 40 years, the theme for 2021 is apt: AIDS at 40: Envisioning a Future We Never Imagined.

The Impact of People with HIV

The 1980s were an era of HIV care that was largely happening in hospitals and buddy programs at volunteer-driven groups, some of which managed to grow into what were called AIDS Service Organizations. The work of people with HIV and the compassion of friends was put into legislation that became the Ryan White CARE Act in 1990. Over the next 30 years, the now-named HRSA Ryan White HIV/AIDS Program (RWHAP) continued to be driven by a focus on consumer involvement and leadership: in planning and working in HIV care programs as peer educators, outreach workers, and more.

One of the closing plenary talks at the 2020 National Ryan White Conference on HIV Care & Treatment sums up much of the history of the RWHAP and what remains to be done. Listen to long-term survivor Jesse Milan's remarks.

See also Living History, with a timeline, voices and videos on the RWHAP

Existing and earlier projects are summarized in People with HIV & Community Involvement. Highlights:

Consumers and the RWHAP: 30+ Years

Since its inception in 1990, HRSA's Ryan White HIV/AIDS Program has supported consumer involvement. In the early years, the focus was on consumer leadership in planning (as mandated by Ryan White legislation) and consumer advisory boards to provide input into agency operations. In subsequent years, resources were developed to  support consumer roles in engaging people in HIV care. Here are some still relevant blasts from the past.

Getting Started: A Consumer Advisory Board Manual for Title IV Programs (2005)

A Guide to Consumer Involvement: Improving the Quality of Ambulatory HIV Programs (2006)